Meanwhile, Russians fleeing sanctions and their government have a harder time getting into U.S.​ 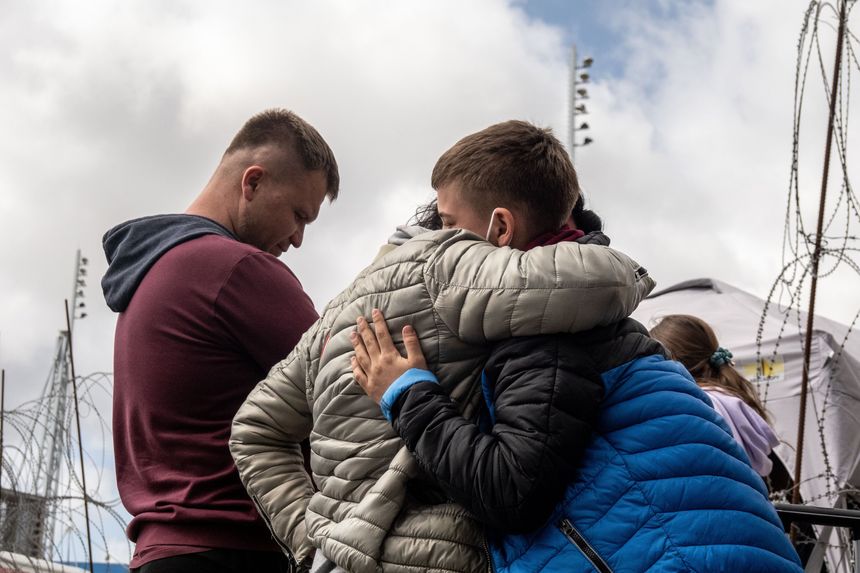 Vladymyr Ostapchuk and his family wait at the San Ysidro border crossing on Sunday in Tijuana, Mexico.PHOTO: CESAR RODRIGUEZ/BLOOMBERG NEWS
By Alicia A. Caldwell
Follow


TIJUANA, Mexico—Vladymyr Ostapchuk and his family walked up to the U.S. border with Mexico on Sunday afternoon to ask for asylum, the final border they would cross after a multicountry trip over 20 days that started as Russian military forces invaded their native Ukraine last month.
Mr. Ostapchuk, a 33-year-old construction worker from Vinnytsia, fled Ukraine by land through Moldova with his two children, his wife, and her brother’s family of four. They traveled through several countries before making their way to Germany, then on to Cancún, Mexico, and later Tijuana, just over the border from San Diego. Once in the U.S., they planned on heading to Vancouver, Wash., to reunite with relatives living there.
“I feel safe, better,” Mr. Ostapchuk said through a translator after he and his family arrived at the border crossing. A few hours later, they were allowed to enter the U.S. 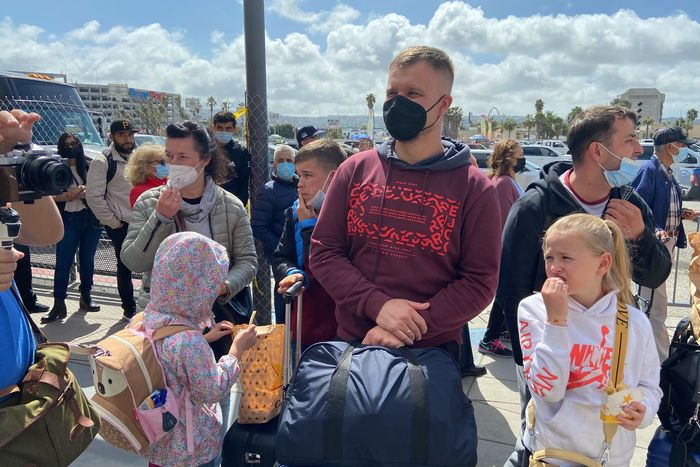 Vladymyr Ostapchuk and his family walked up to the San Ysidro border crossing following a 20-day journey that took them from Ukraine, through Moldova and Germany and then to Mexico.PHOTO: ALICIA A. CALDWELL/THE WALL STREET JOURNAL
Mr. Ostapchuk and his family are among thousands of Ukrainians and Russians fleeing war and sanctions, who are increasingly using Mexico as a transit point as they try to migrate to the U.S. Most choose this route because they don’t need a visa to fly directly to Mexico, unlike the U.S. Once they make it to a U.S. land border, they can ask for asylum and often begin the legal process, which sometimes takes years, inside the U.S. instead of in a faraway country.
Arrivals of Russian nationals and Ukrainian refugees have increased in Mexico in recent months. In January and February alone some 30,111 Russians arrived in Mexico, compared with a full-year average of 12,380 during each of the past five years, according to Mexican immigration data.

Residents in Ukraine’s second largest city tried to extinguish fires after strikes by Russian forces. Following meetings with Western leaders, President Biden travels to Poland to visit a town that’s become a major arms resupply artery for Ukraine. Photo: Felipe Dana/Associated Press
The number of Ukrainians visiting Mexico has also surged during the same period to 10,031 during January and February, compared with a full-year average of 4,078. While entering as tourists, most are likely heading to the U.S., Mexican immigration officials say.
The U.S.-Mexico border remains officially closed to asylum seekers under a public-health rule meant to help curb the spread of Covid-19, but immigration officers working at border crossings were told last week that because of the war they were free to offer exemptions to Ukrainian refugees.

Ukrainian visitors to Mexico have increased in recent months, with most of them likely headed to the U.S.; an agent with U.S. Customs and Border Protection at the border crossing in Tijuana.PHOTO: CESAR RODRIGUEZ/BLOOMBERG NEWS
“The Department of Homeland Security recognizes that the unjustified Russian war of aggression has created a humanitarian crisis,” the memo outlining the exemption process for Ukrainians said.
For most newly arriving Ukrainians, this means they would be allowed to stay for at least a year under a provision called “humanitarian parole” and wouldn’t have to apply for asylum or other protections during that time. On Thursday, in Poland, President Biden announced plans to accept up to 100,000 Ukrainian refugees. It is unclear when they might start arriving in the U.S.
Things are less clear for Russians. In recent months, thousands of Russians seem to have been allowed to ask for asylum and given court dates to begin asylum proceedings. But in recent days, growing numbers have been turned back and told to wait in Mexico, according to immigration advocates, migrants and others. 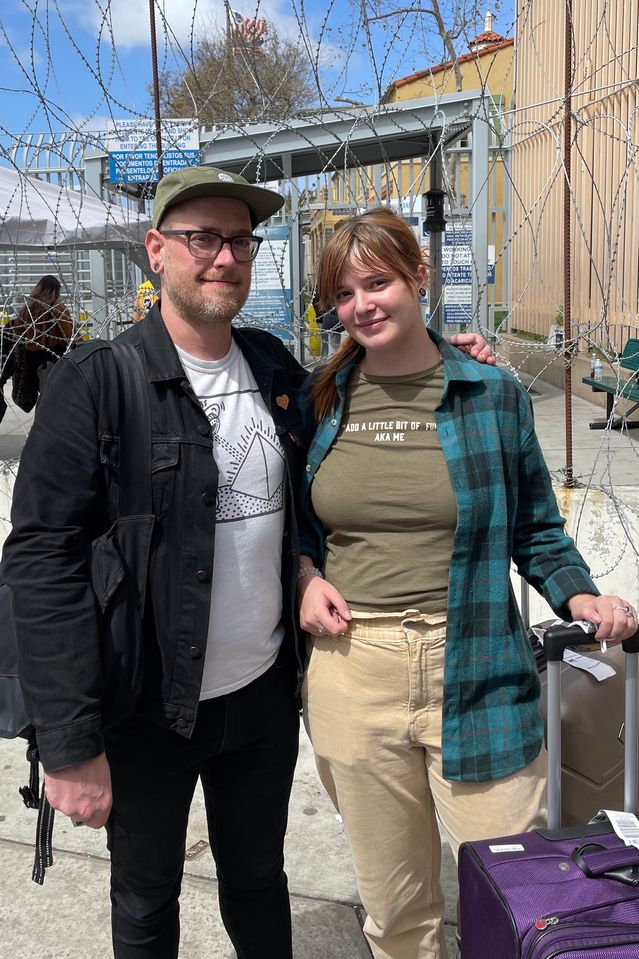 Anastasiia Davidson, a barista from Kharkiv, was waiting in Ukraine for her visa but decided to leave before the war broke out; she reunited with her husband, Ben Davidson, at the U.S.-Mexico border on Sunday.PHOTO: ALICIA A. CALDWELL/THE WALL STREET JOURNAL
On Sunday afternoon, several Ukrainian families, all toting just a few suitcases, were allowed to enter the U.S. after each had waited a few hours on the Mexican side of the San Ysidro border crossing into San Diego.
A Russian group said they were turned away and referred to a Mexican government-operated shelter in Tijuana. The family declined to be identified, but one man in the group said it was confusing that Russians were being treated differently, despite also fleeing the Putin regime.
Earlier in March, groups of Russian and Belarusian families who had slept on the street near the border crossing, hoping to be allowed in, were taken by Mexican authorities to local hotels, immigration advocates said. A Mexican police officer, who declined to be identified, told reporters on Sunday that only Ukrainians were allowed to cross.
Since October, the start of the U.S. government’s budget year, about 1,300 Ukrainians have been taken into custody by immigration officials at the U.S.-Mexican border, more than double the number during all of last year, according to U.S. Customs and Border Protection. Separately, 7,100 Russian migrants have been taken into custody, nearly double the figure from a year ago.
Advertisement - Scroll to Continue

Those migrants were usually quickly released into the U.S. and given a court date to appear to begin asylum proceedings.
The numbers for both Ukrainian and Russian would-be migrants are expected to grow in coming weeks, as the war devastates Ukraine and economic sanctions and growing authoritarianism make life in Russia more difficult.
Ukrainian refugees crossing the border on Sunday waited two-to-three hours outside a U.S. Customs and Border Protection facility. Their children sat atop suitcases and snacked on Carl’s Jr. hamburgers and fries brought by a local volunteer. Once inside, the Ukrainians spent less than 30 minutes being processed and received a stamp in their passports, giving them permission to stay in the U.S. for up to a year.

The Ostapchuks and members of their extended family after crossing the border and being released into San Diego on Sunday.PHOTO: ALICIA A. CALDWELL/THE WALL STREET JOURNAL
“We get to stay…for one year,” a smiling Ilona Martyniuk said, showing off a photo of her stamped passport. She said the family was making arrangements to fly to Washington state and were looking forward to hugging other relatives, including her mother-in-law.
From early on in the pandemic, the Trump and then Biden administrations have used the public-health law known as Title 42 to disregard asylum requests and turn back hundreds of thousands of would-be migrants at the border, most of them from Latin America.
Some immigration advocates want the Title 42 restrictions lifted. The continued use of Title 42, along with reported delays for Russians and other nationalities, harm vulnerable migrants, said Margaret Cargioli, directing attorney at the Immigrant Defenders Law Center, a legal-aid group working with asylum seekers in Tijuana.

The Homeland Security Department has said that every nationality is eligible for an exemption from Title 42 and they are granted on a case-by-case basis.

The Biden administration has temporarily halted deportations to Russia, Ukraine and several other Eastern European countries, all but ensuring that Russian migrants who are already in the U.S. or make it into the country will be allowed to stay for now.
Anastasiia Davidson, a 19-year-old hookah-bar barista from Kharkiv whose husband is an American, said she and her family debated where she should go in the lead-up to the war, choosing between Canada and Mexico. They settled on Puerto Vallarta, Mexico, a beach resort she had visited in early February. She decided to meet up with her husband at the border in Tijuana on Sunday, after the memo authorizing exemptions for Ukrainians was issued.
Ben Davidson, her husband, said the plan was always for Anastasiia to join him in San Francisco—they have already applied for a visa—but the war sped up the process.
“She was going to wait out the U.S. immigration system in Ukraine, but now she has no home to go back to,” Mr. Davidson said. “We were planning on her going to Canada, but it looks like she’s going to be able to come in.”
Ms. Davidson said the rest of her family has stayed in Ukraine. “My house already was bombed. My grandmother’s house was already bombed,” she said, adding that her uncle was killed on the second day of the war. “Every day it’s like a nightmare.”
Ms. Davidson and her husband flew home to San Francisco Sunday afternoon.
Reactions: Indy_Rider

God this administration is such a freaking joke
S

Biden is gonna have to close the border if white conservative Europeans keep getting through. Not the kind of new voters the Dems hoped for.
You must log in or register to reply here.

Victor at it again

We are going to have to hit the Transfer Portal hard

Four reasons why Russian invasion of Ukraine is imminent. WITHIN THE PAST WEEK . . . .