The solution to the Ukraine crisis is Finlandization

Finns Don’t Wish ‘Finlandization’ on Ukraine (or Anyone)​

The Cold War term for a kind of stifled sovereignty has gained attention as a possible solution to the standoff with Russia. But the nation it’s named for would rather forget about it. 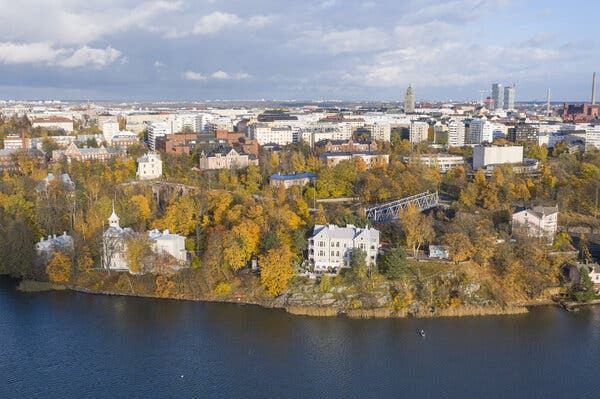 The Finland of today is a member of the European Union that uses the euro and deals with the United States and Europe on its own terms. 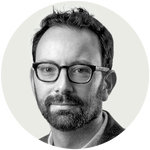 By Jason Horowitz
NY Times Feb. 9, 2022
HELSINKI — For decades, Finland survived as an independent and unoccupied democracy in the shadow of the Soviet Union by handing the Kremlin outsized influence over its politics and hewing to a delicate neutrality during the Cold War. That model — known in diplomatic circles as Finlandization — is now being invoked as a possible solution to the standoff over Ukraine, an idea that would effectively neutralize its sovereignty and possibly allow Russia a new sphere of influence for a new era.

But for Finns, let alone Ukrainians, it is not an idea to be tossed lightly on the negotiating table, smacking of the kind of imperial, Old World politics that once reduced the Continent’s smaller nations to pawns in a game over which they had no control.

Ask Finns around Helsinki’s snowy squares, frigid ports, Nordic design cafes and modern libraries what they think about “Finlandization” and the older generation may look at you askance, and the younger one blankly about a notion that to many belongs in the past. “It has for Finns a negative ring to it,” said Mika Aaltola, the director of the Finnish Institute of International Affairs. “It has to do with a very difficult period in Finnish history.”

While the policy helped this nation at the fringe of the Arctic avoid the fate of Central and Eastern European countries to the south, which were occupied as part of the Soviet bloc, Finland’s independence came at the cost of swallowing no small dose of self-censorship and foreign sway. That changed substantially after the Cold War ended more than 30 years ago, rendering “Finlandization” an antiquated term that no longer applies to the country that gave the term its name, where it is even regarded as something of a slur. 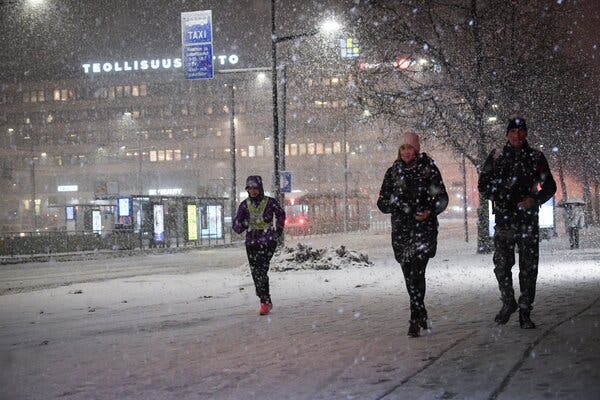 The danger of appeasing President Vladimir V. Putin of Russia comes up often in Finland. The Finland of today is a member of the European Union that uses the euro and deals with the United States and Europe on its own terms. It is lauded for its lack of corruption and generous welfare state and is deeply Western, with strong partnerships, if not membership, in NATO. If anything, Russia’s menacing of Ukraine has only encouraged Finns to debate more openly than before whether NATO makes sense for them, and the once overwhelming opposition is eroding.

But Finns are also clearly aware they have a delicate relationship to manage with Russia and are careful not to unnecessarily provoke President Vladimir V. Putin. Still, that is a far cry from the concessions forced upon it during the Cold War.

Yet the model surfaced again this week, when President Emmanuel Macron of France was asked by a reporter during his shuttle diplomacy in Moscow whether Finlandization was a possibility for Ukraine. He replied, “Yes, it is one of the options on the table.” The French president later tried to step back from the remark. But the seed of Finlandization was planted in the imaginations of some Ukraine watchers, even if Finns themselves bridled.

It remains a difficult thing to discuss, said Elena Gorschkow, 45, a trade union official who smoked a cigarette in Helsinki’s snow-blanketed Senate Square. All around her were signs of the influence of Russia, which ruled Finland from 1809 to 1917. She looked out onto a towering statue of Tsar Alexander II, who emancipated Russia’s serfs, and at the government office buildings and Helsinki Cathedral built in the St. Petersburg style. On the garbage cans, yellow posters read Achtung Russia, or Beware Russia, with Mr. Putin’s face replacing the skull over cross bones. The daughter of a Russian father and Finnish mother, Ms. Gorschkow said she grew up with Finns suspicious of her Russian name, and that her mother still refuses to talk politics when it comes to Russia. 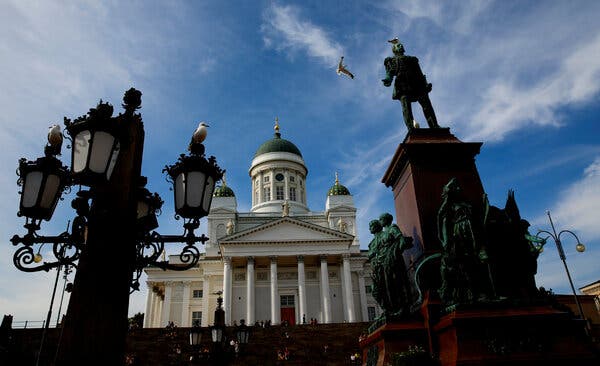 A statue of Tsar Alexander II of Russia in front of the Helsinki Cathedral.

In the Helsinki Central Library Oodi, where students edited film clips on free computers, women embroidered jackets with sewing machines, and hipsters socialized at cafes, Matti Hjerppe, 69, looked across the snowy field at the Parliament building, and said the return of the word Finlandization “makes me laugh."

"It keeps coming up,” he said. “The same things always happen,” referring to Russia’s impulse to extend its influence in the lands along its borders. In fact, the term, originally coined in the 1960s by the Germans (Finnlandisierung), last surfaced in 2014, during the Russian invasion of Crimea, when old Cold Warriors proposed it as a possible solution then, too. (“They should pursue a posture comparable to that of Finland,” Henry Kissinger wrote in the Washington Post, while Zbigniew Brzezinski wrote “the Finnish model is ideal for Ukraine.”) But Finns said that model rewarded politicians who did Russia’s bidding, ostracized those who balked at Russian influence, and introduced a crop of Soviet secret operatives in the country who worked closely with the Finnish elite.

Mr. Hjerppe, a retired librarian, said the term also made him ‘‘a little bit afraid,” explaining how during the Cold War, self-censorship extended from the corridors of power to the family living room.
As a young man, Mr. Hjerppe recalled, he harbored negative feelings toward Russia but kept them to himself. Many young people may have preferred English classes over Russian, and American jeans over the Soviet standard-issue, but overt criticism of Russia, while not illegal, was taboo. Only in the 1960s during the Russian occupation of Czechoslovakia, where his family vacationed and he attended a summer camp, did Mr. Hjerppe realize that his father — visibly worried, though he was a Communist minister in the Finnish government — shared similar feelings. “I realized my parents didn’t like the Soviet Union,” he said.

Mr. Aaltola, the foreign policy expert, did not think Finlandization was good for Ukraine, or Finland either, and while he said the period was firmly in the country’s history, reintroducing it in another Russian border state could only hasten its return here. “Finns understand what happens in Ukraine doesn’t stay in Ukraine,” he said.

The danger of appeasing Mr. Putin comes up often in Finland, and in fact, Finns argue that their independence and inoculation to a renewed round of Finlandization flows from Mr. Putin’s respect for their tradition of military prowess and willingness to take up arms. The Soviets looked to steamroll their smaller neighbor in 1939, but a small Finnish force held off the Red Army for months. Stalin eventually won the so-called Winter War, and took 11 percent of Finland’s territory, but the Soviets never occupied the country and Finland retained its independence.

Unlike Sweden, which has largely disarmed, Finland remains well armed, recently ordering 64 F-35 fighter jets from the United States. It has an army 180,000 strong, and a powerful national resolve to defend itself.

Emilia Kullas, who runs the Finnish Business and Policy Forum, said that today there was more openness to discuss the topic of NATO and hear what their politicians have to say about it, in part because of Russian aggression. “The fact that we talk about NATO is new,” she said. But it was still a delicate topic, and one that Finnish politicians often refuse to discuss in order to keep their leverage between NATO and Russia.

In January, Finland’s liberal prime minister, Sanna Marin, told Reuters that it was “very unlikely” that Finland would apply for NATO membership during her current term in office. Conservatives called her naïve, but political analysts said it might have been a wily move to undercut her critics’ use of NATO as a political issue. 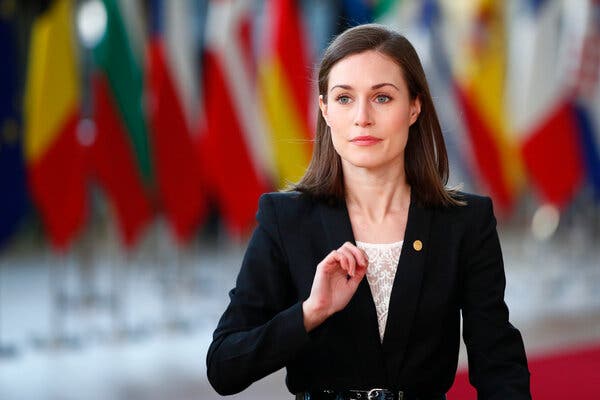 Any suggestion of Finlandization remains taboo. On Tuesday, the chairman of the Parliament’s Foreign Affairs Committee, Mika Niikko said he would resign after suggesting what critics said sounded a lot like a Finlandization policy on Ukraine. He wrote on Twitter that Mr. Macron or someone else should publicly declare that “Ukraine will not join NATO.”

In 2014, the government’s environmental minister resigned after he was assailed for insulting Finland by referring to his own government’s decision to green light a Russian-built nuclear reactor as doing Moscow’s bidding and a throwback to “Finlandization.” The word may be front of mind now for those looking for a solution to the Ukraine crisis, but in Finland not everyone knows it well.

“I heard the term Finlandization on the 10 o’clock news last night,” said Marleene Rytioja, 35, as she chased her two-year-old son in the children’s section of the library, next to dozens of neatly parked strollers. “I had heard the term in school but I don’t know what it means.” She said it seemed to have a negative connotation but that the idea of Russia determining anything in her life seemed completely foreign to her reality. “I feel Western of course,” she said. “We are not Russian.”
You must log in or register to reply here.

Don't Just Stand There Lets Get to it, Strike a Pose There's Nothing to it.

A book that many find of interest...The Founders Speech

OFF TOPIC Is this Rowdy?

Another city prepares for catastrophe