Here is what is not being spoken - highly sophisticated weapons such as air defense rocket launchers, Javelin antitank missiles and Stinger surface-to-air missiles cannot be packed up and shipped to a foreign army with instruction booklets. Those weapon systems require well-trained personnel to teach soldiers how to fire them. Although NATO won't admit it, they must be sending military advisors to Ukraine along with these various missiles. And as soon as Russia identifies some NATO troops in Ukraine, the war escalates and NATO becomes part of the war zone.

NATO Countries Pour Weapons Into Ukraine, Risking Conflict With Russia
Brussels is proud to be providing military aid, but Moscow may see it as a dangerous intervention. 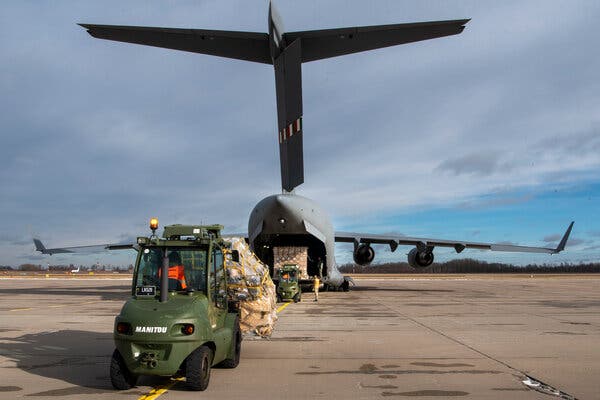 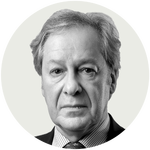 BRUSSELS — The Dutch are sending rocket launchers for air defense. The Estonians are sending Javelin antitank missiles. The Poles and the Latvians are sending Stinger surface-to-air missiles. The Czechs are sending machine guns, sniper rifles, pistols and ammunition.
Even formerly neutral countries like Sweden and Finland are sending weapons. And Germany, long allergic to sending weapons into conflict zones, is sending Stingers as well as other shoulder-launched rockets.
In all, about 20 countries — most members of NATO and the European Union, but not all — are funneling arms into Ukraine to fight off Russian invaders and arm an insurgency, if the war comes to that.
At the same time, NATO is moving military equipment and as many as 22,000 more troops into member states bordering Russia and Belarus, to reassure them and enhance deterrence.

The Russian invasion of Ukraine has brought European countries together, minds concentrated by the larger threat to European security presented by the Russia of President Vladimir V. Putin.
“European security and defense has evolved more in the last six days than in the last two decades,” Ursula von der Leyen, the president of the European Union’s executive arm, asserted in a speech to the European Parliament on Tuesday. Brussels has moved to “Europeanize” the efforts of member states to aid Ukraine with weapons and money and put down a marker for the bloc as a significant military actor.

Ursula von der Leyen, who leads the E.U. executive arm, applauded President Volodymyr Zelensky of Ukraine during a video conference at the European Parliament in Brussels on Tuesday.Credit...John Thys/Agence France-Presse — Getty Images
But whether European weaponry will continue to reach the Ukrainian battlefield in time to make a difference is far from certain. However proud Brussels is of its effort, it is a strategy that risks encouraging a wider war and possible retaliation from Mr. Putin. The rush of lethal military aid into Ukraine from Poland, a member of NATO, aims, after all, to kill Russian soldiers.
Mr. Putin already sees NATO as committed to threaten or even destroy Russia through its support for Ukraine, as he has repeated in his recent speeches, even as he has raised the nuclear alert of his own forces to warn Europe and the United States of the risks of interference.

World wars have started over smaller conflicts, and the proximity of the war to NATO allies carries the danger that it could draw in other parties in unexpected ways.
Jens Stoltenberg, the NATO secretary-general, hit his constant themes again on Tuesday as he visited a Polish air base. “Putin’s war affects us all and NATO allies will always stand together to defend and protect each other,” he said. “Our commitment to Article 5, our collective defense clause, is ironclad.”
“There must be no space for miscalculation or misunderstanding,” Mr. Stoltenberg said last week. “We will do what it takes to defend every inch of NATO territory.”
But for now the fight is in Ukraine, and while NATO and European Union have made it clear that their soldiers would not fight Russia there, they are actively engaged in helping the Ukrainians to defend themselves.
Western weaponry has been entering Ukraine in relatively large but undisclosed amounts for the last several days. If it can be deployed quickly, it will have impact. 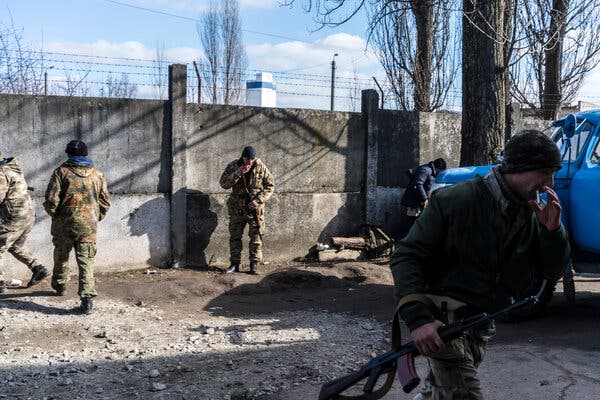 Military volunteers at a weapons storage facility last week in Fastiv, Ukraine, after the Ukrainian government announced they would arm civilians.Credit...Brendan Hoffman for The New York Times
Speed is of the essence as the Russian invasion of Ukraine proceeds and while Ukraine’s border with Poland remains open. Russian troops are trying to surround cities and cut off the bulk of the Ukrainian army east of the Dnieper River, which would make resupply much more difficult.

While 21 of the 27 European Union countries are also members of NATO, the effort to move equipment and weapons rapidly into Ukraine from Poland is being carried out by individual countries and is not formally either a NATO or E.U. operation.
The French say that the E.U.’s military staff is trying to coordinate the push. Britain and the United States are doing the same, setting up something called, deliberately blandly and neutrally, the International Donors Coordination Center. It is doubtful that Mr. Putin will be fooled by the name.

In fact, even if no NATO soldier ever crosses into Ukraine, and even if convoys of matériel are driven to the border by nonuniformed personnel or contractors in plain trucks, the European arms supplies are likely to be seen in Moscow as a not-so-disguised intervention by NATO.
Supplying Ukraine to allow the resistance to bloody Russia’s nose is a good idea, “but the more it ramps up you wonder how Putin will respond,” said Malcolm Chalmers, deputy director of the Royal United Services Institute, a defense research institute. “What happens if he attacks on the other side of the border? We pursue terrorists across borders, why not him?”
From the Russian point of view, NATO military veterans who are now contractors helping the Ukrainians and training them, Mr. Chalmers said, “might be viewed by Moscow as the Western equivalent of ‘little green men,’” the Russian soldiers without identifying insignia who first moved in to annex Crimea.
Then there is always the possibility of Russian aircraft straying into NATO airspace as they try to interdict convoys or chase Ukrainian planes. Something similar happened the only time a NATO country shot down a Russian Su-24 fighter jet, near the Turkish-Syrian border in 2015. 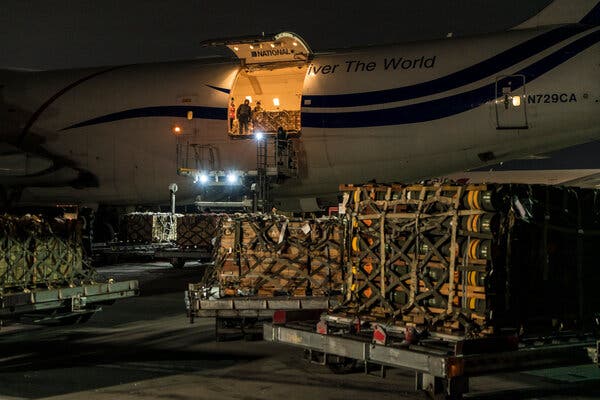 A delivery of equipment and munitions provided by the United States, including nearly 300 Javelin antitank missiles, at Kyiv Boryspil Airport, Ukraine, in January.Credit...Brendan Hoffman for The New York Times
More supplies of ground-to-air missiles like Stingers and antitank weapons like the Javelin are crucial, as is secure communications equipment, so the Ukrainian government can continue to be in contact with its military and its people if the Russians take down the internet, said Douglas Lute, a former lieutenant-general and American ambassador to NATO.

“On NATO territory, we should be the Pakistan,” he said, supplying the Ukrainians as Pakistan supplied the Taliban in Afghanistan, stockpiling matériel in Poland and organizing supply lines.
The European fund being used to buy lethal arms is called the European Peace Facility.
The fund is two years old and is intended, at least, to prevent conflict and strengthen international security. It has a financial ceiling of 5.7 billion euros — about $6.4 billion — for the seven-year budget of 2021 to 2027. If Ukraine needs more money, the E.U. official said, it can be provided.
According to NATO, Belgium, Canada, the Czech Republic, Estonia, France, Germany, Greece, Latvia, Lithuania, the Netherlands, Poland, Portugal, Romania, Slovakia, Slovenia, Britain and the United States have already sent or are approving significant deliveries of military equipment to Ukraine, as well as millions of dollars, while other member states are providing humanitarian aid and welcoming refugees.

On Feb. 25, the day after Russia attacked Ukraine, the White House approved a $350 million package of weapons and equipment, including Javelins and Stingers. Pentagon officials said shipments began flowing within days from military stockpiles in Germany to Poland and Romania, from where the matériel has been shipped overland through western Ukraine.
Poland’s prime minister, Mateusz Morawiecki, promised Ukraine to provide tens of thousands of shells and artillery ammunition, antiaircraft missiles, light mortars, reconnaissance drones and other reconnaissance weapons. Poland, Hungary and Moldova are also welcoming thousands of Ukrainians fleeing the war.

Refugees from Ukraine arriving at the Polish village of Medyka last week.

Sweden, not a member of NATO, announced that it would send Ukraine 5,000 antitank weapons, 5,000 helmets, 5,000 items of body armor and 135,000 field rations, plus about $52 million for the Ukrainian military. Finland, similarly, has said it will deliver 2,500 assault rifles and 150,000 rounds of ammunition for them, 1,500 antitank weapons and 70,000 combat rations.
But NATO has also moved to sharply reinforce its deterrence in member states on its eastern flank, to ensure that Russia does not test NATO’s commitment to collective defense.
The United States alone has deployed 15,000 extra troops to Europe — 5,000 to Poland, 1,000 to Romania and 1,000 to the Baltic States — while committing another 12,000 troops, if necessary, to NATO’s Response Force, being used in collective defense for the first time.
Washington has also deployed more fighter jets and attack helicopters to Romania, Poland and the Baltic States.
In other examples of the rapid NATO effort to beef up its eastern borders, France sent its first tranche of troops to Romania on Monday, to lead a new NATO battalion there, and provided Rafale fighter jets to Poland.
Germany, which already is lead nation of a NATO battalion in Lithuania, has sent another 350 troops and howitzers there, six fighter jets to Romania, some troops to Slovakia and two more ships to NATO’s maritime patrols. Berlin also said it would send a Patriot missile battery and 300 troops to operate it to NATO’s eastern flank, but did not specify where.
Britain, the lead nation of the NATO battalion in Estonia, has sent another 850 soldiers and more Challenger tanks there, plus 350 more troops to Poland. It has also put another 1,000 on standby to help with refugees, and sent another four fighter jets to Cyprus, while sending two ships to the eastern Mediterranean. 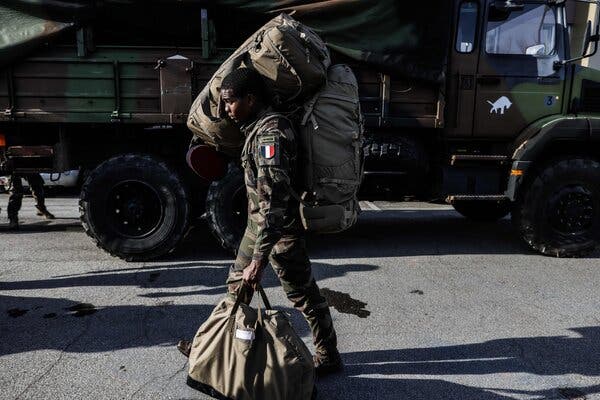 A French soldier in Brive-la-Gaillarde on Tuesday as his regiment prepared to leave for Romania.
Canada has sent some 1,200 soldiers, artillery and electronic warfare units to Latvia, as well as another frigate and reconnaissance aircraft, while putting 3,400 troops on standby for the Response Force.
Italy sent eight fighter jets to Romania and put 3,400 troops on standby, while the Dutch have sent 100 troops to Lithuania and 125 to Romania, and assigned eight fighter jets to NATO duties.
Denmark is sending a frigate to the Baltic Sea and will send 200 soldiers and deploy four fighter jets to Lithuania and some to Poland to support of NATO’s air-policing mission, while Spain has sent four fighter jets to Bulgaria and ships for maritime patrols.
This is hardly a complete listing, but gives an indication of the seriousness with which NATO is taking the threat of further Russian aggression or of a spillover of the war into NATO territory.
Reactions: guidelinesa2

Putin and Russia are not a threat to the West. They are not the Soviet Union. Putin is nearly 70, he has maybe ten years left in life.

The West has tried to impose its hegemony on Russia and have cornered them. This was a mistake that caused this situation. Russia should have been allowed to maintain a sphere. Instead of turning him into a pariah we should offer him things to allow him to save face and claim victory and end the conflict.

Our strategy here is going to backfire. I am no fan of Putin or Russia, but I do know basic strategy and Ive read Kissinger's book on diplomacy.
You must log in or register to reply here.

How to stop Russia within hours....

Interesting conversation with a Kauai local